Say good bye and the Recycle Game in Scratch

Our Game is a little story – game made in Scratch that you can play it from here: http://scratch.mit.edu/projects/LuisGalindo/1945412

What we try to show in this story – game, is the recycle workshop that we did and that we hope it will continue and grow with the work of the children themselves, especially at the end of the year, in Christmas times, where children can make cards, books, notebooks and other materials with recycled paper generating profits for themselves and somehow putting their bit to solve the waste pollution problem.

Most game characters were drawn by one of the girls living in the Children’s Home: Wendy, and the story was worked with other girl: Evelyn.

The first part is the presentation of the story – game, the animation did not give many problems. The biggest difficulty in this first part was to understand the part where you click on your character for the story to continue, but in general there were no major difficulties. 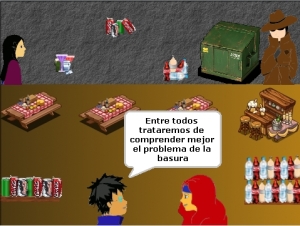 In the second part (the restaurant), for the part where the characters talk to each other, there were no difficulties and everything goes well. Once the dialogue between these two characters ends, we can move Lunara (the character who visits the restaurant) forward and backward, then we can position Lunara on each “set of dump” and we will receive an explanation of another important character: “El Hombre Misterioso” (The Mystery Man). After reading the explanations of the “Mystery Man” appears to us a key on which we can click to move to the third scene. The biggest difficulty and so far still not clear is the use of variables in programming, a very important aspect of programming that is becoming clear as we practice (like everything in this World). The reality is that kids still do not handle well the issue and lack lot of practice to do so.

The problem of understanding variables became even bigger when we entered to the turtle game, where the use of variables becomes a very important aspect in building this part of the game.

In this third stage, our little turtle must collect 35 bottles or cans and avoid colliding with the red line that leaves behind as it moves. You have to remember that you have 15 seconds to collect each bottle or can. The good news is that you can click 3 times in the green trash that you have in the top to wipe out all the red lines left.

Understanding this third stage will continue to take time, so I will make 2 more workshops dedicated to the understanding of this stage that is clearly very difficult to assimilate. 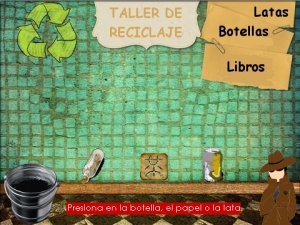 If we get the 35 cans or bottles, we have the opportunity to enter to the last part of the game: the recycle workshop, where we can see the pictures of our work, recycling both paper and bottles. Also, we can see what we could do with other materials such as cans.

The whole project was a great experience, from our work with our games in Etoys to this new recycle game in Scratch. In just a few months is impossible that kids can make themselves more complex games, making a deeper use of programming tools, because the concepts are still unclear and they do not have a stranglehold on them. In my opinion this is a process that takes several years, and the research document that I’m writing about this pilot project will try to show the problems and successes in this experience during these months, I hope to have this document ready by September or October.

I think that working with videogames has a great potential in education, especially if children are playing an important role in the construction of games or simulators to represent or explain real life problems. This can be applied to almost all subjects, from mathematics, physics or literature, to music, art or design.

To create our story – game about our recycle workshop, we explored from how it is organized, planned and designed a project. We also work in the construction, design and interaction of the characters, in addition to the dialogue and the story itself, working with other software such as GIMP. And at the end one of the most important aspects of building this game for the analysis, problem solving, which involves entering a trial and error experience, was programming.

As we created this game of the recycle workshop, we could create small games or simulations on a myriad of issues that we have in school. It is a more enjoyable way of learning, because we are creating as we learn. One of the main words when we create something and see the final result is motivation. Of course, this work that mixes art and programming takes a few years of working with tools like Etoys, Scratch or the Python programming language itself, so I think it’s worth to follow this path of creativity.

We still have a couple of workshops for just deepen the management of Etoys, Scratch, and Python. 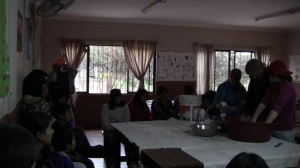 On Saturday, while the cold and rain was arriving to Santa Cruz, it was also the ‘Say Good Bye’ for one of the German volunteers who participated in the recycle workshop: Lena. I’m always grateful to Lena, Sabrina and Nicola for enriching this experience with the recycle workshop, which without them would not have been possible :-).

As winter begins we are finishing our project. Finishing and hoping to start something new 🙂

The Videogame in Scratch

Our game is going very well, and much of the game is already finished, we still have to work a little in the dialogues, in a couple of draws (our main character) and in deepen the most important aspect of the game: understanding the encoding and the organization of the project (two characteristics involving many potentialities to develop).

At first, the girls designed a fairly complex game, but as we moved forward in its construction, we realized that is not a good idea to start with something huge and complex, but instead, go step by step, building and understanding what we’re doing. It is for this reason that the game will be divided into different versions.

This coming week the winter vacation begins (2 to 3 weeks of vacation), the idea is to use these weeks to finish our game and upload it to the Scratch website.

Thanks to 3 German volunteers (Lena, Nicola and Sabrina) who are working with the collective of artists “Arterias Urbanas”, the work will not stay in a videogame, and yesterday we began a project to make various objects with recycled materials like paper and bottles.

The aim is to create books and other objects, such as picture frames, ornaments or recycled paper bags. And at the same time, we want to recycle bottles, creating another objects.

Yesterday started this wonderful experience with a nice theater made by Lena, Nicola and Sabrina. Then started all the work to start recycling paper.

A few days ago I was watching the presentation of Dr Laura Hosman’s “Technology for Development: No Shortcuts”, link shared by Nick Doiron. This presentation reflects the need to integrate different elements to OLPC deployments, giving especially a base of good support to the different OLPC projects.

The idea of this experience in Santa Cruz is somehow, integrate different technology tools with another disciplines, in this case, the arts, and also try to give support for future deployments like this through local universities.